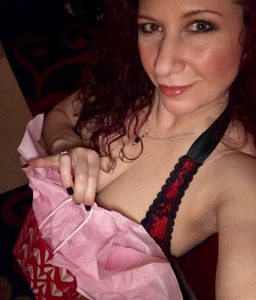 Here’s a rambling post about the recent holiday, may it inspire you to your own acts of unapologetic pervyness.

First things first, I think Valentine’s Day is pretty much money motivated, mass-marketed, monogamy propaganda. I’ve felt like this when I’ve been single, and when I’ve been in relationships, including the current lovely and long-lived one I’m in now. Seriously, this one year I intentionally scheduled a  surgery on 2/14 as the idea of spending even part of the day under general anesthesia sounded great. So thats my cranky, Gen X, feminist disclaimer.

It started with a text from my honey – “Happy Captain Cook being stabbed to death by Hawaiians Day my Love! Can’t wait for our date tonight! I think we should have tacos post butt sex.”

That text is a master class presentation on how to make me happy. Honor my inner grumpy regarding mainstream holidays (with a nice shout out to our shared feelings on white colonialist), express enthusiasm for being in my company, and promise me your ass, and tacos, in proper order.

I flirted back by posting a pic on his Facebook of Jim Henson and Kermit.

I love orgasm control. Sometimes to prolong an experience, sometimes to be evil, sometimes because its funny, sometimes to build character, train folks for better self control, but always because it turns me on to do so. This time around, my playmate was likely even more interested in his delayed gratification then I was. This meant I could fuck him as hard, and fast as I wanted, I could make him stroke his rope-bound dick while he licked me to sweet release again and again. But as excited as he got, as tight as my cunt and that rope squeezed, as much as he wanted to come, he wouldn’t let himself. Because he really wanted that sweet ass pounding and he wanted it as good as it can possibly be, so fearing the refractory period he held back, and denied himself the nut he desperately wanted to bust. But he couldn’t not fully enjoy what was happening leading up to that happy event. Couldn’t not stretch and strain himself into every last inch of my pussy while I rode him at a gallop until just when I felt his resolve slipping and then I’d freeze until he whimpered for more. That was very entertaining for quite awhile.

When I knew he was both utterly lost, and reliably determined, I left him to his own devices and made use of his skilled mouth. When he was inside me, his successes aided his resolve, as each of my orgasms flooded away some that tempting friction. But drinking in all that wonderful wetness just worked him up more, and leaving his “leash” in his own hands, did him no favors. I could feel him try and negotiate with himself to just come, even if it meant less awesome butt stuff, even if it meant no butt stuff that night.

Luckily the choice was made for him when he brought be to one of those big, beautiful, all bets are off, Os which was as good a time as any for a little break…and a transition to butt stuff.

And for the record, it was his idea to cage his dick before I started working his ass.

Sluts, I tell you, always expanding what it means to super size an experience.

I like him best crouched at the edge of the bed for fisting. Easier for him to open up while in a comfy position. It also puts his ass at the perfect height for me, standing behind him I can comfortably take my time. I usually start with just a couple of fingers to warm, and lube, him up. Couldn’t not tease him a bit more so I focused in on his prostate and pillaged the bejeezus out of it till his moans got guttural. And then we start stretching him open. Two fingers become three, worked that in till it felt ready and then a little longer just to make him wait for what I knew he was  really craving. Four fingers isn’t that much of a change, but once you fold in the thumb, then you start getting the pressure of what the real challenge is going to be. That row of knuckles, thats reaching the summit for fisting. Mine are 3 1/2″ across. A large amount of lube, and a surprisingly small period of time, working my hand a little further in and a little less out, a little more in, and a bit out. And then that delicious moment when I slid fully inside him. I gave him a moment to adjust himself to his new reality while admiring the unique view. And then we got. Right. To it. Interspersed slow measured strokes with bursts of fast intense pounding, working myself in nice and deep, found the resistance spot and pressed into it with every stroke till he was completely lost to the fuck. When I felt he’d “suffered” enough I set a steady pace, pressing heavily on his happy button with each pass, until I felt his body tense around me. His come drained right out through his untouched, still caged, cock while he screamed his orgasm into a pillow.

I am a master puppeteer.

After a bit of cleanup we tried to order some food but keep getting a busy signal. While we were waiting for the line to clear we got a little cuddly and well, one thing lead to another…another bunch of orgasms to be exact, one of which was directed onto my feet.

Valentine’s Day feels pretty fucking redeemed, even if we did miss out on tacos.